While Dennis Quaintance is thrilled to be reopening his company’s Greensboro’s O. Henry Hotel and Green Valley Grill on Thursday, he knows his hospitality businesses have a tough climb back amid a world wary of the coronavirus.

‘With the 50% seating [capacity limitation], we may lose more money when we open than we are losing while we are closed,” he says, referring to the state’s requirement for restaurants offering dining-room service. Until Gov. Roy Cooper changes the state’s rules, hotels can’t hold functions for more than 10 people, also slamming potential revenue.

But the veteran restaurateur says he’s excited about getting back to business at two of his company’s six properties. “I think we can walk and chew gum at the same time. People die of poverty too,” he says. “If we are careful with how we do things and take care of the people who dine there and stay in hotels, we shouldn’t see a huge spike [in illness.] But if is the biggest word in the dictionary.”

Starting more than 30 years ago, Quaintance teamed with local investor Michael Weaver to build a group of four restaurants and two hotels. They sold the business in a  conversion to an employee stock ownership plan in 2016, putting ownership in the hands of the company’s 670 staffers. He says it has a been a great success by uniting the staff and improving retention. “In an ESOP, what is good for one is good for all and what’s bad for one is bad for all.”

The business’ sole debt is paying back the Quaintance and Weaver families on a multiyear payment plan. The families are deferring debt payments during the crisis and created a $100,000 emergency relief fund for workers facing special difficulties. The company’s senior and middle managers have taken voluntary 50% and 30% pay cuts, respectively, during the pandemic. Quaintance says he no longer draws a salary.

Quaintance-Weaver received a Paycheck Protection Program loan recently, which was timed well for the reopening plans, he says.  Under terms of the federal program, the loans are forgivable if the money is used for staff compensation and basic business expenses. Plans call for opening the Lucky 32 Southern Kitchen restaurant dining room in Cary in late June, while it’s unclear when Lucky 32, Print Works Bistro and Proximity Hotel in Greensboro will reopen.

Before the crisis, the restaurants were thriving, while business was slower at the hotels due to “anemic” demand in Greensboro as competition from some new properties picked up, Quaintance says.

Many restaurants won’t survive the pandemic because of capacity restrictions and higher debt levels, he predicts. “If you take away the last 20% of a restaurant’s revenue, you take away 100% of the profit. And most restaurants may have more debt now than when we were going into this.”

Indeed, a number of N.C. restaurants have said they won’t reopen. One of the latest is Smith Street Diner, which operated on Battleground Avenue for more than 15 years, the Greensboro News & Record reported this week.

But the Triad area remains an excellent business environment, Quaintance says. ” We have an opportunity to prove to the world how a real, genuine diverse community can be the change we want to see.” 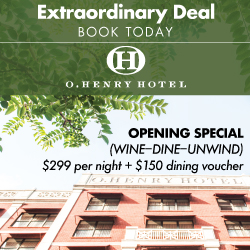